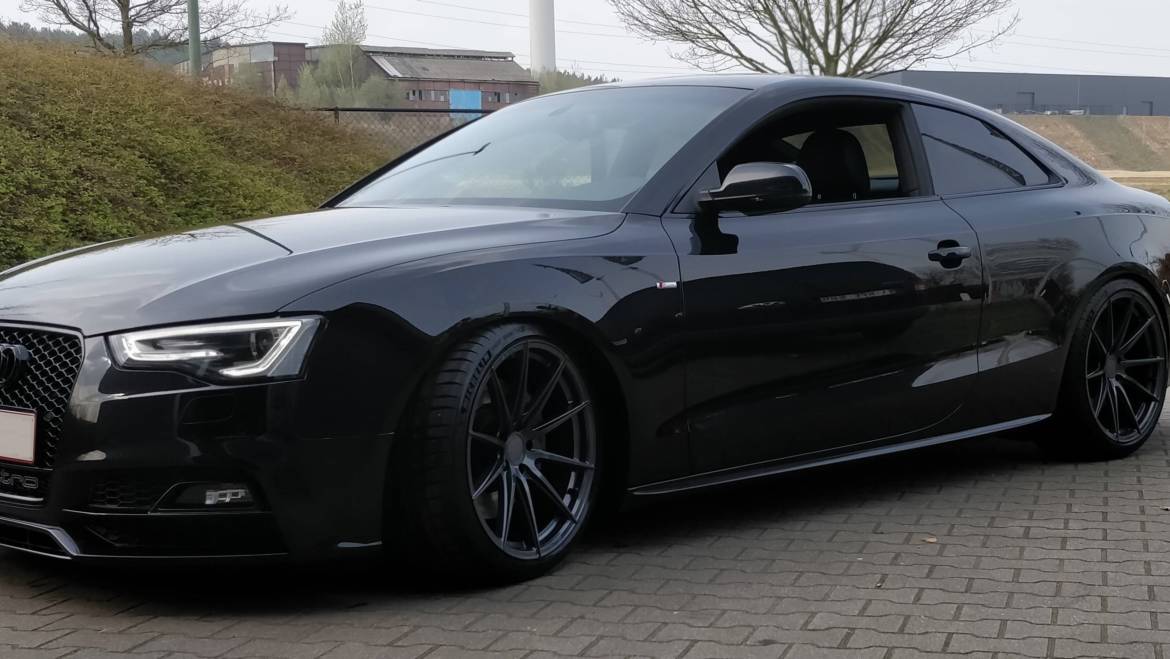 Bought with the knowledge that the 2.0T where easy to modify. There was some minor plans in the beginning.
But these quickly escalated into bigger and more expensive plans.

This car was a bit of a learning curve. Being the first MLB platform EA888.3 engine we did.
At the time a lot of things were still new and even today there are not many parts which are a straight fit on this car.
Like the MQB platform for the Golf 7 R/GTI these engines have an integrated exhaust manifold.
The turbo’s are similar in design but not a straight swap.
However like the Golf 7 GTI this model uses a IS20 but a model designed for the longitudinal engine setup.

Going from stock to stage1 already provided a nice gain going from 225HP to 295HP. Which was a straightforward inhouse ECU tune.

Going to a stage 2 tune wasn’t as simple.

All of the parts we found were made for the B8 model which had some difference which meant we had to modify a lot of things.
The wagner intercooler at the time was only available for the B8 at the time.
To get this to fit meant we had to fabricate some custom mounting brackets, since the rebar of the B8 is different then on the B8.5.
Which was the main issue for getting this installed.
The intercooler pipe going from the intercooler exit to the throttle body was also not compatible, so here also we had to do some fab work.
Currently we are still working on a fully customised intercooler pipe for this part so we can reinstall the methanol kit and remove some restrictions in this area.

Next up the ECS kohlefaser carbon air intake which was sadly again no direct fit.
This was also designed to the B8/B8.5 models with a EA888.2 engine so some minor differences again.
Heat shielding was different on this car compared to what was expected.
And the provided silicon hose to replace the restrictive OEM hose wasn’t compatible either.

To finish it up we added a custom build decat pipe to the milltek quad tip exhaust setup.

After our new custom tune the car made 350HP/525Nm torque.
At this time the clutch also decided it was time to go. It started slipping occasionally when doing some pulls from a stop.
Later on we played around with launch control(WOTBOX) and pretty much concluded pretty fast the clutch was done for.
The fact that we burned it up trying to make the car launch probably didn’t help. The smoke coming out from under the hood pretty much proved enough.

Surprisingly enough the clutch was still ok for regular driving even after the abuse it endured.
But this also gave us our next issue to tackle.
The more local solutions like Sachs didn’t offer any upgrades for this car.
Or at least not any that where known to fit.
So we had to expand our horizons a bit and contacted our partners at Clutch masters in Rialto, CA(USA).
They quickly offered a fitting solution with their FX350(street/race) + aluminum flywheel setup.
This clutch is offering 110% increased holding capacity.
So we have a clutch which offers plenty of gripping power even for future changes.
On top of that the pedal feels not much different then the stock feeling.
The aluminum flywheel required a small learning curve to deal with though.
A week after ordering we were ready to install the clutch and after a bit of a break in period our clutch showed that it could handle all the torque we had and had no issue when launching the car.

At this point we experimented a bit with this car to see what else we could do.
But quickly realised we maxed out the turbo and in order to get any bigger numbers some major changes had to be made.

So for a while nothing else was done to the car.

But late summer 2018 things started back up when we pulled the engine out and changed all of the internals and replaced them with forged parts.

This change meant our engine was now able to handle 650HP with the correct additional supporting mods.
The high pressure fuel pump had to be replaced which was easily done.

Our partners are GotTuned build a stage3 hybrid IS20 longitudinal turbo setup for this car which was able to give the car 430HP.
However having a complete rebuild engine capable of so much more we had to figure out a way to get closer to that maximum.

So we started talking and figure out a way to this done.
Currently we are waiting on a IS38 Stage3+ with ceramic ball bearing setup converted to work on a longitudinal setup.
This should allow us to get around 600HP but until everything is fabricated and installed we will have wait before finding out our final number.

We will keep you updated as soon as everything is done in a few months.

No products were found matching your selection.

We use cookies to ensure that we give you the best experience on our website. If you continue to use this site we will assume that you are happy with it.OkNoPrivacy policy